« WALTZING DE PALMA: A COMMENT ON THE COMMENTS | Main | WHY THE O.C. IS SMARTER THAN THE AVERAGE BEAR (AND TEEN SOAP) » 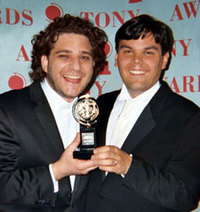 I admit it: this is the one I've been waiting for. As I've expressed previously on this blog, I am a huge fan of Avenue Q. The only people more excited than I when the show won this past year's big Tony awards were those who actually created and worked on the show. So I'm sure you can understand why I was surprised but ecstatic a few months ago when I received an email from Jeff Marx who, with his partner Robert Lopez, created the show. It seems that Jeff had run across one of my posts from around Tony time, and he wanted to thank me for the support.

It so happened that before getting this email, I had said to Lily, "You know what would be really great? If we could do a Gothamist interview the guys who wrote Avenue Q." So when I replied to Jeff, I figured it couldn't hurt to ask. Amazingly, he accepted with barely any sales pitch from me. Fortunately for Jeff and Bobby, they're in such demand right now that we weren't able to get the interview done for our November interviews. Fortunately for us, they're nice enough to not back out, and today you can read the results.

We asked Jeff and Bobby a lot of questions, and they took the time to answer everything in so much detail -- even though we couldn't use absolutely everything, their interview is still a long, detailed and really interesting read. They talk about how they became writing partners, where the show came from and their Cinderella-story ascent from workshop to Tony winners, all utilizing foul-mouthed puppets and honoring the "patron saint of life sucking," Gary Coleman! The one thing I'm sure of – it sure as hell no longer sucks to be them.

If you live in New York and haven't actually seen Avenue Q, what the hell are you waiting for? There really isn't a better, funnier, more creative show on Broadway, and it will have you humming for days. Go see it … now. It really was better than Cats. I want to see it again and again. (Rinse and repeat!) But since it doesn't play until the evening anyway, take some time right now to read their interview.