« IT'S THE END OF THE NETWORK NEWS AS WE KNOW IT, AND I FEEL FINE | Main | ALL I WANT FOR CHANUKAH » 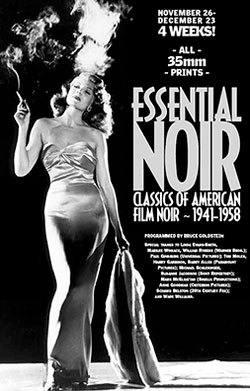 I'm heading out of town for the holiday this afternoon, but I wanted to remind everyone of one of the best screening series to hit New York in a while starting this week at Film Forum. In fact, right now, Film Forum is most definitely the place to be. Starting today French master Jean-Luc Godard's latest Notre Musique, which screened at the New York Film Festival in September. At the same time, the one week run of Wong Kar-Wai's Days of Being Wild has been held over so if you weren't able to get to it (like me), now you have another chance. In order to make room for Wong's film, though, the extraordinary Tarnation will end its run, but don't fret because it's just moving 12 blocks north and a bit to the east to the Cinema Village on Friday. All three are must-see movies.

But none of those are what I really want to mention right now. Last month I geeked out a bit at the upcoming repertory schedule at Film Forum, and the series that starts this Friday is why. Talk about Thanksgiving – we should all be giving thanks to Film Forum for programming four weeks worth of double features (34 films in all) that truly earn the moniker "Essential Noir." Between BAMcinématek's Visconti series (see below) and this one, I could easily spend every day shuttling back-and-forth between Fort Greene and the Village, if only I didn't have to go to that pesky job.

Virtually ever film in the series is an absolute must-see for any film lover. These were the true golden age of American cinema; a time when American filmmakers were doing something unique and reflective of the world in which they lived. For film lovers who worship the art house and foreign cinema of the '60s and '70s, particularly the French New Wave, film noir was one of the most influential styles to everything that has come since. Sure most of them deal with crime and murder, and many were low budget B-movies, but the influence of storytelling techniques and cinematography from these films can be seen in many movies ranging from the art house to the multiplex today. Current filmmakers continue to make movies with noir elements and occasionally even films that try to qualify as a part of the style. But no matter how good these modern films may be, none of them are as pure as the ones Hollywood made from the early-40s through the mid-50s – the ones included in this series.

Film noir is noted for its high contrast photography – scenes where what's in the shadows are as important, if not more so, than what's in the light. Black and white is less of a concept than varying shades of grey, and because of the importance of the look of the film, seeing these movies projected as they were intended, seeing the actual grain of the film stock is something that you should take advantage of. Seeing the movies' images as light projecting through celluloid enhances all of these films; watching them on tape or DVD or even the brilliant TCM just isn't exactly the same. The movies are still great; they're just not as great.

I'll preview the weeks as they come along, but suffice it to say that Film Forum could not have kicked off this series with a better choice.

Friday through Sunday, your $10 buys you admission to a double feature of Double Indemnity and Mildred Pierce. Michael Curtiz's Mildred Pierce is a great movie featuring an Oscar-winning and career-defining performance by the great Joan Crawford. But Billy Wilder's Double Indemnity is quite simply one of the best and most important films noir -- and one of the greatest movies, period – ever made. There are many great films belonging to this style, but to my mind, Double Indemnity and Out of the Past (screening 12/19-12/20 with Alfred Hitchcock's Shadow of a Doubt) are the two best examples of perfect noir. I don't say this to demean any of the other great films, and there are many, but if you look for the best of the qualities that epitomize this style, those two movies top the list.

Don't take my word for it. Check out Double Indemnity this weekend. And if you want to see one of the best examples of the B-movie noirs, be sure to check out the incredibly bleak Detour along with the great Burt Lancaster vehicle Criss Cross on Monday 11/29. Do yourself a favor and take advantage of this gift from the Film Forum programmers because this series truly is "essential."