IT'S SO VERY, VERY, VERY WRONG: AND YOU WONDER WHY I WENT OFF ON A RANT LAST TIME

Here I was, minding my own business, when I read an appalling -- APPALLING I SAY -- headline that I appear to have missed at the end of last week: Rent to Be Filmed in San Francisco. Obviously, it was being hidden from me, but thanks to Gothamist, I heard about it today. I already had problems with this pending movie adaptation of Rent simply because of news that Chris Columbus would be directing. A worse pairing of filmmaker and material can hardly be imagined (other than Barry Sonnenfeld and White Noise, although actually, I think that has a better chance of succeeding).

Now don't get me wrong, I love San Francisco. Even more than New York, in fact. You see, as I've mentioned before, I'm from there. I was born there; I grew up there ... and not "San Francisco" only to mean San Rafael or Hillsborough or Berkeley or Palo Alto or Daly City, but actually San Francisco. But pay close attention: San Francisco is not New York. Neither is Vancouver or Toronto. And I know movies always use different locations, but for Rent that really should not have been the case.

Additionally, the story mentions that filming will take place on "Treasure Island." For those who don't know, Treasure Island is a man made island in the middle of San Francisco Bay. If you're heading from San Francisco to Oakland across the Bay Bridge, Treasure Island and it's natural sibling Yerba Buena Island are somewhere in the middle. Treasure Island was built in 1936 (opened in 1939) with the original intention of being an international airport and then it hosted the 1939-40 World's Fair. (The photo is an arial shot of the fair. Looks just like the East Village at night, no?) The military took it over during World War II because of it's position in the middle of the Bay. It now is mostly a tourist destination with a museum.

San Francisco is justly trying to increase filming in the city. But I'm confused: they're going to build the East Village 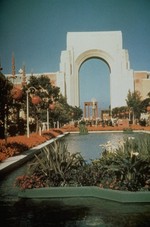 on Treasure Island? So it will all be a big set? Or, are they using it primarily for offices and some exteriors with the plan to shoot on location in the streets of San Francisco which, by the way, look absolutely nothing like Manhattan? San Francisco is a gorgeous urban landscape, but it sure as hell isn't New York. I mean, see how pretty Treasure Island is? I guess you could mistake that for the Washington Square arch if you squint really tightly so you can't actually see anything.

Either way, it's bullshit. Although I'm not surprised. To be fair to Chris Columbus (and I disagree with Jen from Gothamist: he mangled the first two Harry Potters, especially the second), it's possible that the studio is putting him up to this. But then again, I have no desire to be fair to such an immense hack. I wrote before that aside from being an utterly mediocre director with a decent talent for making pretty pictures, he has no talent at a story and will fundamentally misunderstand Rent. Well, here he is already starting to do so.

I'm sure Columbus's idea is that Rent is actually a cautionary fable and as such the reality he tries to instill in it will be even greater with a purely designed (and therefore artificial) environment. Sadly, I believe this is probably a Harry Potter influence on him. He enjoyed creating the entire world of the film from scratch so much, he thinks he can do that with Rent and turn some part of Treasure Island into Tompkins Square.

He's wrong. In fact, in the case of Rent, the exact opposite is necessary. Nearly the entire script (at least on stage) is sung. There is enough of the storyline and the show that rings completely false. The one thing it does ring true about is the time and place. A specific moment in time and a specific place in the world -- New York in the early '90s. That time and place should not be recreated somewhere else. That time and place should also not be moved. The show is not about the Castro or the Tenderloin of San Francisco, nor should it be. It's themes may have been somewhat universal, but it's story was not. Sadly, that's something that Columbus won't ever understand, maybe simply because he can't.

Some people are expecting Rent to be the next Chicago, but along the way they seem to be forgetting that show isn't just about people who live in New York: it is (or was) New York.

They've been building sound stages on Treasure Island since it went private, it's one of the "multi-use" purposes that the City heralded a few years back, along with LucasFilm building offices in the Presidio. So, they will probably build sets and film it that way.

I don't care one way or another, I couldn't sit through Rent.

I've heard the exteriors will be shot in the East Village, so don't you fret. Chris Columbus is an SF homeboy, and mayor Gavin Newsom has been trying to get more film business here by the bay. The studios being built by LucasFilm at the Presidio are digital production studios, not soundstages. The Rent production got a great deal to shoot here in exchange for making some capital improvements to the soundstages on Treasure Island. Give our poor little not-New York, not-LA town a break. It's not like we don't have crazy rents.

I'm looking forward to stalking Ms. Dawson, that's for sure. As for the musical theater, you guys can have it. I'd rather it all stayed in NYC.

So fucking wrong. And, really, you hit the nail on the head in that last sentence. Thank you.

Yeah, I know about Mayor Newsom's attempts to increase film production in San Francisco, and as a native, I wish him the best of luck. My comments are not a knock on San Francisco whatsoever; it's a critique on the filmmakers and the business of filmmaking. This is another example of commerce (and an idiot) taking precedence over story and the good of the film. I'm pretty sure they could have struck a magnificent deal to shoot on location in NYC and use soundstage space at the new Brooklyn Naval Shipyard studios. All these tax incentives were just passed and Mayor Bloomberg has been trying to bring more production to the city. I would bet that Columbus, wanting to stay home, went looking for a San Francisco option first, and I'm sorry, that's just wrong. He can make as many "Nine Months" in the Bay Area as he likes, but Rent is going to be tough enough without creating a completely artificial environment.

And by the way, I hope nobody is mistaking me for a Rent fanatic. I think the show is very good, but as I believe I wrote in my original post, I never found it to be the end-all, be-all reinvention of musical theater so many others proclaimed it to be. Still, I think there is a potentially really good movie hidden in there, especially with the right creative team. I don't know that Spike Lee was necessarily the answer, but you could have bet that it would have been something new and fresh and different (even if not necessarily good), and he would have shot the damn thing in New York!