« FORGETTING TO BE A LITTLE MODERN | Main | IT'S THE END OF THE NETWORK NEWS AS WE KNOW IT, AND I FEEL FINE »

A REASON TO SPEND TIME IN BROOKLYN 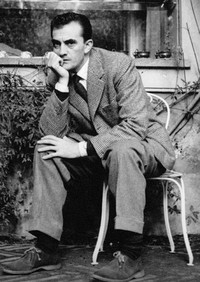 Yes, yes, I know there are many, and many people who live in Kings County wouldn't even want to move back into Manhattan even if they could afford it. But leave that whole argument aside for now anyway, because I'm talking about movies, not quality of life -- even though the two are somewhat entwined. There are often very good reasons to attend the BAMcinématek, but never more so than right now. Running today through Dec. 16, BAM will be screening the complete works of Italian filmmaker Luchino Visconti.

When The Leopard had its little run at Film Forum back in August, I know both the Cinecultist and myself encouraged you to go, and since it took Karen multiple tries to get into the almost-always-sold-out engagement, some of you must have listened. If you didn't get downtown for that screening -- maybe it was just too far from your Brooklyn abode? -- The Leopard (in what is billed as a "new print") is just one of several films you really shouldn't miss during this program. Unfortunately for me, I'll have to because I'm headed out of town for the long weekend and, of course, that's when it screens. As does Visconti's neorealist masterpiece Rocco and His Brothers.

But that's not all: you would definitely find it worth your while to watch La Terra Trema on Monday 12/29, Senso on 12/1 or 12/2 (featuring an appearance after the 12/1 6:50 PM screening by star Farley Granger who, aside from having a great name, is best known as one of the stars of Hitchcock's Rope and Strangers on a Train, and Visconti's first film, Ossessione on 12/8 and 12/16. Visconti didn't play around when he chose material, and he attempted the nearly impossible task of adapting two incredibly complex novels with Albert Camus' The Stranger and Thomas Mann's Death in Venice. His success in both instances is debatable, especially if you get annoyed by filmmakers taking liberties with their source material. Still, the generally well-regarded The Stranger, screening on 12/9 stars two of the greatest actors in the history of Italian (and probably all) cinema, Marcello Mastroianni and Anna Karina, so that alone is reason to see it. More controversy surrounds the success of Death in Venice screening on 12/10 and 12/11, but Visconti belongs among the pantheon of filmmakers who don't make bad films; they just makes some films better or worse than the others on their resume. Since I myself have yet to see either, there's a damn good chance you'll see me in Fort Greene in two weeks. You should head over to BAM yourself.