« A NOTE TO OTHERS ATTENDING THE NEW YORK FILM FESTIVAL | Main | R.I.P. CHRIS »

JUST PAST THE MIDWAY POINT: THOUGHTS ON THE NYFF

Now that that's over with, as I just mentioned, in my eight years of attending the New York Film Festival, I can't recall a collectively better year than the one I've seen so far. Maybe one of these days, I'll actually get around to writing in detail individually about most of the eight films I've seen (so far) at this year's edition, but simply put, I've loved most of them, and not one could be categorized as anything less than above-average. 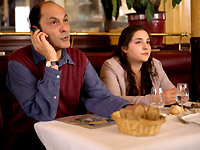 The opener, Look at Me, is a wonderful French comedy that deserves the audience and success a crappy film like Love, Actually receives due to its much more effective handling of multiple characters and stories. Director Agnès Jaoui is remarkably adept at letting the audience feel the individual emotions of every single character without ever getting in the way of the overall story or becoming annoying. It's a delightful film that never feels forced or absurd and doesn't shy away from moments and elements that many comedic filmmakers are afraid will drag down a story but, as Jaoui proves, really serves to make it all the more human. There is something in Look at Me to which absolutely everyone should be able to relate. (The film will apparently be released in the US next February.) I understand why the incredibly accomplished screenplay won an award at Cannes this year, but that shouldn't take away from the overall skill Jaoui exhibits as a filmmaker.

The reconstruction of Samuel Fuller's The Big Red One is, as Filmbrain aptly describes in his review, one of the best WWII movies you'll ever see.

I'm sad to admit that I had trouble staying awake all the way through the great French master Eric Rohmer's Triple Agent, but I don't fault the movie as much as my lack of sleep the night before, not having eaten that morning, already having sat through the nearly 3-hour Fuller film and, most importantly, the fact that Lincoln Center doesn't seem to understand the concept of climate control -- Alice Tully Hall is always waaaay too hot, and if I'm not falling asleep, I'm sweating. What I saw of Triple Agent was very different for Rohmer although still a good example of why he's such a brilliant filmmaker.

Undertow surprised me in a positive way because I've always been one to appreciate David Gordon Green's ability as a director without necessarily loving his films. George Washington was good, and exceptionally well-made, but my personal tastes do not make me a huge fan of the deliberately slow and plodding narrative and somber moodiness perfected by Terrence Malick and utilized by Green. I didn't like All the Real Girls at all. But Undertow shows Green taking his style and placing it onto a more conventionally structured narrative with distinctive genre elements. In some ways, I don't think it's necessarily as accomplished a film as George Washington, but in others, it's an enormous step forward for a very talented young filmmaker.

In the Battlefields was probably my least favorite of all the films I've seen so far, but it was still very interesting. It's story of a young Lebanese girl trying to make sense of the world in the midst of war-torn 1980s Beirut is compelling but a bit thin. The director -- whose background is in documentaries -- spends most of the time showing moments and events without really tying them together well enough into one cohesive piece.

Or (My Treasure), on the other hand, manages to do both very effectively. This Camera d'Or winner from the most recent Cannes Film Festival is a very bleak Israeli film about a 17-year-old trying to get her prostitute mother to go straight. I really don't want to say anything more about the story because everyone should see this film (I'm not sure if it has distribution in the US yet, but if not, I hope it will), regardless of the NY Times' latest condescending critic's description of the film as "irritatingly naive" (a comment which in itself is just plain stupid and, shocker, naive). Yes, the story is heavy-handed and depressing, but it's also well-plotted, tight and consistently gripping, and the filmmaking talent on display is quite impressive.

Mike Leigh's Vera Drake is both another example of why Leigh is such a brilliant filmmaker and an acting tour-de-force on the part of Imelda Staunton in the titular role. While I found the first hour drawn-out slightly more than necessary, Staunton's ability to transform from the quintessential kind-hearted optimist full of life with a kind word for everyone no matter how grim the surrounding situation into a terrified and quivering old woman is breathtaking. If she's not an Oscar nominee come January, the Oscars will be worthless. Leigh's interrogation scene alone is a masterpiece of filmmaking and acting. Vera Drake opened in New York on Sunday after it's festival run (and goes wider on 10/22), and you should all run out to see it.

And finally there's Almodóvar. What can one say about Pedro Almodóvar other than he is one of the most provocative, creative and fascinating filmmakers the world has probably ever seen. Bad Education does not diminish that reputation in the slightest, and in fact, as someone with a near obsession with film noir, this movie only shows me how limitless his talents truly are. With the help of Gael Garc&#237a Bernal (who in drag is still prettier than most women), Almodóvar puts his own twist on the noir style all while taking a little dig at the Catholic church. And it all starts with the opening credits. Bad Education will likely remain one of my top movies of the year, and it is a definite must-see when it's released in the US on 11/19.

Before the conclusion of the festival Sunday, I'm still supposed to see The World, Keane, Saraband and Palindromes -- the last about which I'm most excited -- as well as a couple of the "Selling Democracy: Films of the Marshall Plan" programs playing as a sidebar to the main festival. I may not be able to get to Keane or Saraband actually, so I may have a ticket (just one) to each available. If anyone is interested, please contact me via email or IM.