I came home last night to find the new "Revivals & Repertory" circular from Film Forum in my mailbox. Aside from being one of the few places anywhere to see small indie and foreign films that may not get a larger release, their other programming is often fantastic. From great revivals such as Billy Wilder's Kiss Me, Stupid and Jean-Pierre Melville's brilliant Le Cercle Rouge and Luchino Visconti's The Leopard to repertory series focusing on Rainer Werner Fassbinder, Ingmar Bergman and, most recently, F.W. Murnau, Film Forum's schedule is often impressive and usually filled-with must-see engagements. With that said, never before have I been as thoroughly excited by their schedule as I was when I saw the words "Essential Noir" on the circular in my mailbox last night.

That's right: Film Forum, thanks to its great repertory programmer Bruce Goldstein, has literally programmed 4 weeks of films noir featuring 34 of the best and most important movies belonging to what is arguably the most significant and influential period and style in American cinema history. Is absolutely every great noir included? No. There are a some wonderful films missing such as The Glass Key, The Set-Up, In a Lonely Place, and Raw Deal (just to name a few), but I'm really just quibbling here because at some point they obviously have to cut-off the list. Still, the 34 films included are in fact all "Essential Noir: Classics of American Film Noir – 1941-1958" and the best part is that almost every program is a double feature – 2 films for the price of 1 admission.

Seriously, I tried to highlight just a few of these programs but then I realized I was listing every single one. How can you pick when just about every film listed is an absolute masterpiece of American cinema. I'm going to have to move-in to Film Forum to see all of these again (all projected in 35 mm) and to catch the few which I've never seen before. Just go to the Film Forum web site and look at the list. If you said, "Aaron, I can only go to three programs, so don't pick more than that," I'd swear a couple times and then tell you to go see Double Indemnity and Mildred Pierce on 11/26-28; The Postman Always Rings Twice and The Lady From Shanghai on 12/10-11; and Shadow of a Doubt and Out of the Past on 12/19-20. However, I only pick those because Double Indemnity and Out of the Past are the two absolute best of the entire genre, and Postman and Shanghai feature two of the most alluring femmes fatale to even hit the screen in Lana Turner and Rita Hayworth, respectively. 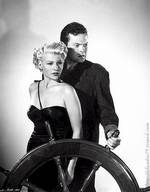 But then I'd also implore you to check-out Sweet Smell of Success and Touch of Evil (the last "true" noir?) on 12/17-18, and I'd also suggest you not miss The Lost Weekend or The Killers or The Big Sleep or Murder, My Sweet or Kiss Me Deadly or The Maltese Falcon or … sigh.

By the way, the "Essential Noir" series doesn't even start until 11/26. Meanwhile, what's on the rest of the Film Forum Schedule? Only Peter Davis's classic Vietnam documentary Hearts and Minds from 10/22-11/4 followed by a restored 35 mm print of Elia Kazan's near-perfect On the Waterfront. If you've never seen it, and you live in New York, you are required to go to Film Forum during its 11/5-11 engagement before you see anything else or read another film blog, this one included.

But that's still not all, because from 11/12-18 they've got the reconstructed version of Samuel Fuller's The Big Red One which I just saw at the New York Film Festival last weekend. A remarkable depiction of World War II, grand and intimate at the same time, featuring a career-defining performance by Lee Marvin (and that's saying something) as well as turns by Mark Hamill and Robert Carradine that might actually make you forget that you're watching Luke Skywalker and lead nerd Louis Skolnick.

But wait, there's more, because the week leading-up to the "Essential Noir" series features Days of Being Wild by the ultra-cool Wong Kar-Wai. Considering this is one of his films I've never seen, I can't wait. 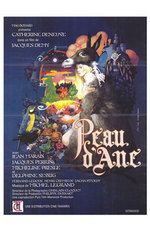 Often, Film Forum presents a revival of a film that I've never heard of, and I get quite excited about the opportunity to see something a little less famous projected as it was meant to be. I know Jacques Demy, but I'd never heard of his 1970 fantasy musical Donkey Skin starring Catherine Deneuve. It sounds interesting, to say the least, and you can be sure I'll find some time during its run from 12/24-1/4/05 to get downtown to see it.

And then on Jan. 5 for one week only, a new 35 mm print of Raging Bull in honor of the film's 25th Anniversary. Sure I own the DVD of what many people consider the best film of the 1980s, but I won't miss an opportunity to see it projected onto a screen that, although not enormous, is far bigger than my TV.

The mailer only takes us into late January, but running 1/12-20 will be a return engagement of Luchino Visconti's The Leopard. If you missed this grand and opulent epic during its recent run, try to catch it this time. And don't worry, I'll remind you when the time is near.

What I'd really suggest is that you follow my lead and just buy a membership for $65. You then pay only $5 (instead of $10) for each ticket, and what that means is that over the course of a year, if you go to Film Forum 13 times, you're breaking even. Any more than that, and you're actually saving money. I'm pretty sure I'll hit my 13 during this three month period alone.

Thanks Film Forum. Now if you could only create more time in my day so I can actually get to all this stuff, I'd be most appreciative.

film forum can't change the space/time continuum (i don't think) but last time i asked, they did offer to write an excuse note to my boss. now that's cinematic service!